Some information regarding tendon health and recovery

A tendon is a band of fibrous connective tissue that links muscle to bone. Tendons are used to produce movement. As the horse’s muscle contracts, tension along its corresponding tendon increases, thereby resulting in movement of the bone(s) to which it is attached.

A structure that is often confused with tendons, but has a total different function is a ligament. A ligament is a band of fibrous connective tissue that binds bone to bone or ligament to bone. A ligaments function is to stabilise structures relative to one another, such as two bones on either side of a joint.

There are 2 main types of tendons; 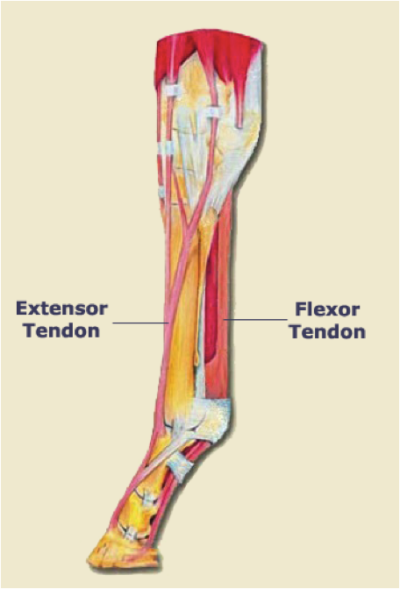 Tendons must run along at least one articulation (joint surface) in order to perform their function and require lubrication along each angled (or “bent”) juncture to allow for smooth and effortless movement. Without sufficient lubrication, the tendons would wear excessively due to the increased friction they would encounter as their fibre orientation changed while coursing along the curved surface(s).

The smallest functional unit in a tendon is called a fibril. Fibrils in turn are bundled lengthwise into collagen fibres, a few of these fibres form a primary bundle, together they form the fascicles and finally they end up forming the tendon itself.

We have to see the tendon structure as a built up of very small fibre structures (like tiny pieces of rope), organised very neatly in line with each other. When there is tension on the tendon, the fibres slide along each other and slide back when the tension reduces. The ability to stretch and recover to the set point is the essence of functionality of the tendon.

The athletic ability of a tendon is mainly determined by its ability to withstand heavy loading without getting damaged. 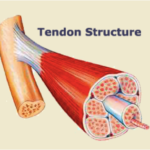 Tendon injuries, just like other soft tissue injuries can be divided into acute injuries and overuse injuries.

-Acute injuries are caused by a sudden trauma, such as a fall, twist, or blow to the body. An examples of an acute injury in a horses is a tear in the superficial flexor tendon in the front leg (“a leg”).

-Overuse injuries occur gradually over time, when an athletic or other activity is repeated so often, areas of the body do not have enough time to heal between occurrences. An example of an overuse injury in a horse is damage to the high suspensory area.

A tendon will get damaged when the pulling power is so large, that the fibres are pulled apart. Instead of sliding and bouncing back, the fibrils in the tendon are pulled to a point where they can’t recover the original position.

In most cases a damaged tendon will present itself with local swelling, pain when touching, some heat and often (but not always) the horse shows a lameness.

The damage doesn’t always have to be directly visible. A horse can develop tendon tissue damage without showing any symptoms (sub clinical injury). These cases are dangerous as this stage often leads to serious injury if the horse is worked as usual. It is therefore very important to take any sign of pain, swelling or heat in a tendon very serious.

A damaged tendon will go through different stages in order to heal. During each stage we have the ability to influence the final outcome of healing.

The first stage is the inflammatory phase. This begins immediately after injury and will last the first few days after injury. Blood flow to the area is increased. Platelets release growth factors and pro-inflammatory signals, and a fibrin clot forms a temporary framework for the tissue to stabilise the injury.

In this stage rest, support and anti-inflammatory treatment are important. It is known that initial injury size can get bigger in the first 1-2 weeks as a result of mechanical “pulling” on the affected area. With this in mind horses are rested and often supported with bandages during this stage.

The problem is that even when just standing the tendons will still be pulled and the injury can/will get worse. bandages are not able to give enough support to avoid this “pulling”.

With this in mind we advice the use of our Dynamic Support System (DSS) from an early stage (high support setting) so that excessive pulling can be avoided. (read here more about DSS)

Regular use of ice and other anti inflammatory treatments is advisable in order to avoid excessive inflammation and avoidable tissue damage.

The proliferative stage starts in the first week after injury and will lead to forming of blood clots and filing of the damaged area with scar like tissue. It is very important that we realise, and accept, that tendon cells don’t grow back. This means that the scar tissue needs to be “trained” in order to act like tendon tissue later on.

Towards the end of this stage the active trigger to healing is reduced by the body and the availability of natural stem cell activity and other growth promoting factors are getting less. In this stage it is often advisable to reactivate the healing response by introducing substances like PRP, Stem-cells, and other biological regenerative treatments.

A low amount of loading on the tendon in this stage is advisable, but can only be done safely if the peak load on the tendon is controlled. Traditional protocols leave horses during this stage on complete rest, but this will further reduce healing ability and increase forming of inferior scar tissue.

During the last stage remodeling of scar tissue takes place. During this stage the first fibrils are formed (particularly type I collagen fibers) which become aligned in the direction of strain on the tendon. During maturation, the scar tissue gradually changes to scar like tendon tissue and depending on the protocol followed this stage can take up to 12 months. Traditionally the focus is on “filling the hole in the tendon”, but filling with poor quality scar tissue leafs to very poor results (industry average shows that only about 20% of horses return to previous level of exercise)

Several studies (P. Eliasson 2011, M. Hammerman, et.al 2018) have shown that Ruptured tendons heal faster if they are exposed to mechanical loading. Early loading creates organisation of the matrix and will lead to early fibre forming and less “unorganised scar tissue”. Early loading will lead to a better functioning tendon with a better long term outcome.

Appropriate loading is needed to increase the quality of the healing tendon without inducing microdamage and alter the inflammation in the tissue. This is hard enough to achieve in human patients, but how can we do this in equine patients?

The first step is to be able to assess the fibre content and composition in the tendon. Conventional ultrasound is very limited in producing this information. The use of Tendon Tissue Characterisation technology (UTC) makes it possible to collect the required information of the tendon in order to establish best possible loading off the tendon.

UTC will show us whether the exercise (loading) of the tendon is not enough (leading to inactive scar tissue), too much (leading to micro trauma) or appropriate for achieving optimal healing. 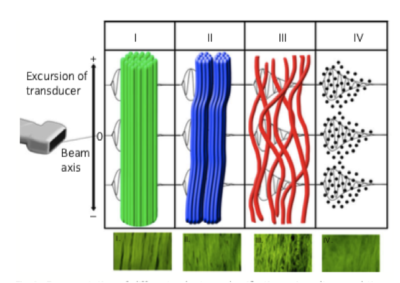 Managing peak load on a tendon in a horse

It is a big challenge to achieve required exercise (tendon loading) with a horse in hand or under saddle. A sudden jump away, a slip or just being too “fresh” can lead to a sudden high peak load and diminish all the good work done in the days (weeks) before.

We acknowledge this challenge and have implemented the use of our Dynamic Support System (DSS) in our tendon rehabilitation protocols. This device is designed in order to exercise horses with a set “peak load” by regulating fetlock extension. The boot has 4 settings and depending on the stage of healing and Tendon Tissue Assessment results the fetlock extension is gradually increased. Using this boot allows safe exercise of the horse within the required range of motion.