Guide to the application and use of the Equestride DSS 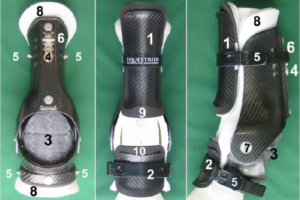 Application of the tendon support boot
1) As the support device is designed to fit snuggly onto the limb, the limb should be
unclipped and un bandaged. If a wound is present, it should be covered with a nonadherent
dressing and a thin layer of wound cover.
2) The device should be disassembled into it component parts – the main boot, the dorsal
metacarpal plate (1) and the dorsal pastern plate (2). The desired setting should be
selected by unscrewing the locking screw (4) on the back of the device (figure 1) and
sliding the adjuster (6) so that it matches the setting number.
Setting 1 – Only provides support at full fetlock extension. Used during the later stages of
rehabilitation when the horse is trotting/working
Setting 2 – Provides support at the walk and trot.
Setting 3 – Provides some support to the fetlock joint at all times.
Setting 4 – Provides a significant level of support when the horse is standing. Used when
there is significant hyperextension of the fetlock joint or as an emergency splint
Thus the setting should be gradually reduced during the rehabilitation period to increase
the proportion of load taken by the palmar/plantar soft tissues.
Note that the setting can NOT be changed while the leg is weight bearing.
Figure 1 – The four settings that can be selected relating to the amount of fetlock support
required. 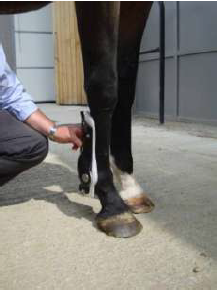 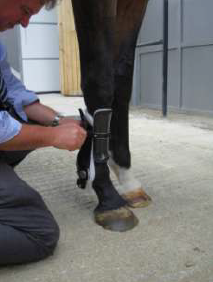 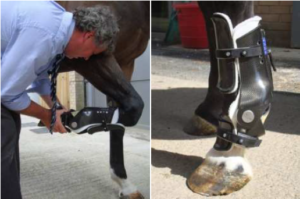 6) After application, it is recommended that a thin cohesive bandage, such as VetWrap is
applied over the entire outside surface of the device. While not essential this outer
wrapping process is worth doing as it ensures that the horse does not damage or interfere
with the device, particularly during initial period when it is becoming accustomed to it.
External wrapping also has the added benefits of keeping any dirt away from the injury and
the moving parts of the device as well as improving the overall security of the fasteners
and adjustment mechanisms while in use.

Size Fitting & Adaptation for Smaller Animals such as Foals and Yearlings
While the device is made for full-size adult horses it can also be adapted very effectively for
smaller animals such as foals or yearlings. In such applications the device’s own soft Inner Lining
material (8) can removed and replaced with a custom made cotton & cohesive bandage of a
suitable thickness as required to fill the extra space. When doing this it is important that the
bandage be applied as evenly and smoothly as possible to avoid varying thickness and any
uneven pressure under the device. The bandage should extend from the knee or hock level all the
way down to the coronet band of the hoof. When the correct thickness of cotton & cohesive
bandage is achieved the device should then fit snuggly over the bandage without requiring
excessive pressure to apply. In some cases both the the supplied soft Inner Lining material (8) and
additional bandaging can be used.
Note: In this method of adapting to smaller animals, it is important to remember that it is only
necessary to replace/add the Inner Lining Material (8) with the cotton bandage. The front foam
pads elements (9) and (10) must always be used.
Removal The process is essentially reversed.
• 1) The limb is lifted and the dorsal pastern plate pushed against the pastern to unclip it
from both sides of the boot (figure 6). It is then removed.
Figure 6 – Removing the dorsal pastern plate first with the limb raised 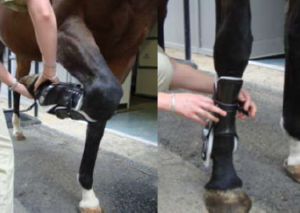 • 2) The dorsal metacarpal plate is unclipped in the same way (figure 6).
3) The device is then eased off the back of the limb.

When applying
– Metacarpal Plate (1) on first, Pastern Plate (2) on last.
When removing
– Pastern Plate (2) off first, Metacarpal Plate (1) off last.
Period of use
The Tendon Support Boot is intended to be worn during exercise only and it enables horses
recovering from tendon or ligament injury to be exercised safely during rehabilitation giving the
maximum chance of full recovery. It also means that horses can get back into light work quicker
and the amount of pain suffered by the horse is noticeably reduced. In some cases the device can
be worn when in paddock and other longer periods in the day (only under veterinary supervision).
The device is not intended as a replacement for a conventional stable cast or splint.
1) Early stages of injury rehabilitation when there is significant hyperextension of the fetlock joint
The device has four variable settings that take only seconds to adjust. The amount of support that
the system provides to MCP joint extension and suspensory ligaments depends on which of the
four settings is selected. The highest setting (setting 4) provides total support to the limb and is
used for immediate post-injury treatment when maximum support is required.
The device at setting 4 can also be used as an emergency aid to stabilise an acute injury
and is an excellent means of instantly enabling a severely injured horse to walk into an
ambulance and transport it from the racetrack/show grounds to the hospital. Used in this
way the device will also reduce the risk of further injury occurring during the immediate
post injury period and in transportation.
2) Later stages of injury rehabilitation when the horse is exercising.
As the rehabilitation progresses, the device should then be used intermittently for exercise
sessions ranging from 10 to 35 minutes per day. As the horse improves over time, the setting is
gradually reduced through settings 3 and 2, down to the lowest setting 1 which is for the later
stages of rehabilitation when the horse can once again resume training. Thus once fetlock support
has returned, the device can be used when there is an increase in the exercise level – for example
the introduction of trotting or initial turn-out.

At the same time, there would be a gradual reduction in the settings so that there is a gradual
increase in the amount of load applied to the soft tissues while still providing support and higher
loading. Once the horse is considered to have made a significant recovery, use of the device can
then cease.
The importance of not over-supporting for too long.
While it may seem sensible to give constant support to an injury, over–supporting for too long or
depriving a horse of exercise altogether, can in itself have adverse effects such as poor quality
healing and laxity in the limb. Therefore it is important to reduce the support setting as healing
progresses. Without challenging the injured tendon or ligament in this way, the tendon or
ligament’s capacity to heal and regain its own independent strength and resilience is reduced. The
Tendon Support Boot, at the correct setting, allows the soft tissue injury to be challenged safely.
It is important to check regularly for the development of any sores. These are unlikely if the device
is correctly fitted and applied but the most common sites are medially and laterally at the level of
the fetlock joint. If any bandage material is applied to the limb this should be replaced on a daily
basis at the same time.
Contra-indications
1) Wounds present directly under the pressure points of the device which are dorsal pastern and
metacarpal/metatarsal regions, palmar/plantar fetlock and medial and lateral fetlock. 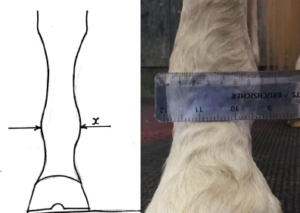